New Awakenings At The Phoenician Spa 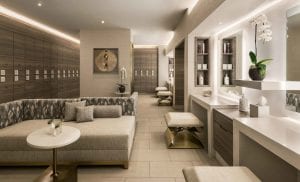 This article first appeared in The American Spa Magazine, December 2018.

The Phoenician Spa is a renovation and repositioning project that the team at Spa Strategy had worked on for 18 months. This article in American Spa magazine highlights the extent of the renovation. Prior to our appointment for Business Analysis and Design & Technical services we had been contracted for several previous business analysis studies, so it was wonderful to finally see the project green lit with the new owners HOST Hotels & Resorts.

A key feature of the renovation was to position the spa to recapture market share in a saturated spa market. We identified several key areas of opportunity, which included expanding the facility vertically to include a roof top pool with views of Camelback Mountain.

Debuting 30 years ago, The Phoenician, A Luxury Collection Resort (Scottsdale, AZ) and its original spa, The Centre for Well-Being  were the talk of the town.  However, times and tastes change, and both Scottsdale and nearby Phoenix are now home to a host of enticing spas. With such fierce competition in the neighborhood, it was time for a major update. As Sheryl McCormick says in the article. “It was time to create a more contemporary, approachable luxury. HOST Hotels & Resorts invested heavily in a complete multi-year transformation for the resort. This included the construction of the brand-new three-story Phoenician Spa, with a more nurturing, healing focus in design as well as in its variety of new amenities and services.”

The spa was designed by Architects: Houston Tyner and Interior Designers: Parker Torres

Page load link
Our website uses cookies for technical, analytical and marketing purposes. Here is more information. If you agree to this, just keep browsing. Ok
Go to Top